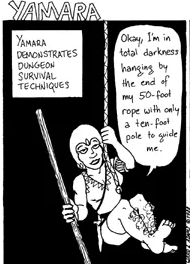 is a comedic webcomic by Barbara Manui & Chris Adams. The first strip appeared in Dragon Magazine in 1988, staying until 1996 when it moved online. A 'relaunch' set after a three-year timeskip ran from 2004-2006 and unceremoniously stopped mid-story.
Advertisement:

The setting uses mechanics from the AD&D RPG. It follows the misadventures of a party of monster hunters: Yamara Tooke (a halfling Fighter/Thief), Joe Holy (a human Cleric of St. Nobian's, the church that funds the group), Fëa of Ping Forest (an elf Magician and former Game Show Hostess), and Blag (a dwarf fighter). Blag and Fea eventually faded out of the storyline, while several other characters rose to starring roles - Fëa's familiar Ralph, Ogrek the Undisciplined, Persephone the love-sick vampire, Matron Stress of the dark elf city of Ekmuz-Strel-Thridd, and more. Although their adventures started on the generic gameworld planet Wyhtl, the cast did take an extended trip via spelljammer to the world of Hard Fun in order to mock it for a while.