Comic Strip / What The Duck 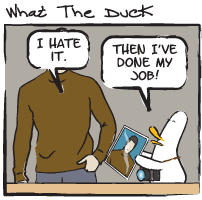 is a comic created by Aaron Johnson. It is a daily comic strip printed in many syndicated newspapers, including the Toronto Star.

The character most often in the spotlight is a white duck who makes his living as a professional photographer. Other characters include differently-coloured duck photographers, each with a different backstory and personality, as well as human clients whose faces are never shown.

This comic provides example of: