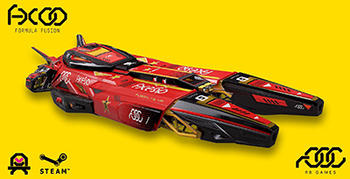 Formula Fusion is a futuristic anti-gravity racing game from R8 Games. The game is created with collarboration from The Designers Republic who is responsible for the graphic design of earlier games in Wipeout series in the past.
Advertisement:

Touted as the Spiritual Successor of the aforementioned game series, Formula Fusion puts the player into FXWAR racing league, piloting customizable anti-gravity crafts and taking advantage of pick-up pads on the track to gain victory.

The game underwent a Kickstarter campaign in April 2015, entered Steam Early Access program and finally released on PC in 1st June 2017, with plans for PlayStation4 and XboxONE and Mac OSX in the future.

The game contains example of: