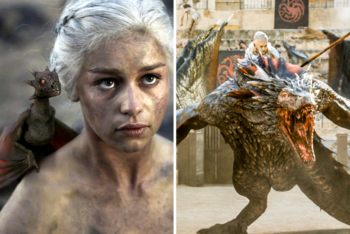 Drogon goes from sitting on Daenerys' shoulder... to the other way round. And he keeps getting bigger.
Advertisement:

When a very large creature such as a Kaiju first appears in fiction, it's usually alone, and menacing for its sheer size even if it's not ferocious. If it acquires offspring, or is shown in flashback as an infant, the image of baby creatures invariably differs: unable to loom like an adult, the juvenile's depiction will become cute and cuddly (if it's friendly) or fast-moving and in-your-face (if it still wants to eat you). Either way, this transition from towering bulk to close contact is facilitated by making the subadult creature much, much smaller than its parent or adult self. Small enough, in fact, to interact easily with and/or appeal to human characters, in ways that the mature version can't.

While this makes sense in terms of drama, it can also lead to situations where the offspring are so tiny, it seems a bit bizarre to we humans to think that baby and adult versions are the same species. This is mostly a case of human/mammal chauvinism — many, many invertebrates and fishes in Real Life are tiny or even microscopic as hatchlings — but the feeling of incongruity persists.

Truth in Television when it comes to dinosaurs, as even the largest of the long-necked herbivores were no bigger than puppies upon hatching (though they did grow very quickly).

Often used to incorporate the Shoulder-Sized Dragon trope in stories about much larger dragons. May be combined with Cub Cues Protective Parent.