Film / The Water Horse: Legend of the Deep 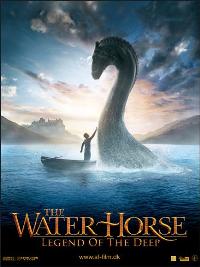 How do you keep a secret this big?
Advertisement:

The Water Horse: Legend of the Deep (known sometimes as just The Water Horse), is a 2007 family fantasy film loosely based on a book by Dick King-Smith, directed by Jay Russell and co-produced by the same company who co-produced The Lion, the Witch, and the Wardrobe, and the last film to be co-produced by Revolution Studios. The plot revolves around Angus MacMorrow (Alex Etel), a boy who lives with his mother and sister in a mansion on the shores of Loch Ness. One day while looking for shells in the tidepools, he discovers what appears to be a large egg in the sand. He takes it home and puts it into his father's shed, but when he comes back to check on it later, he finds that it hatched a mysterious creature that he decides to call "Crusoe" after Robinson Crusoe. Thus begins an adventure in secrecy and discovery that entangles itself in the age old mystery of the Loch Ness Monster.