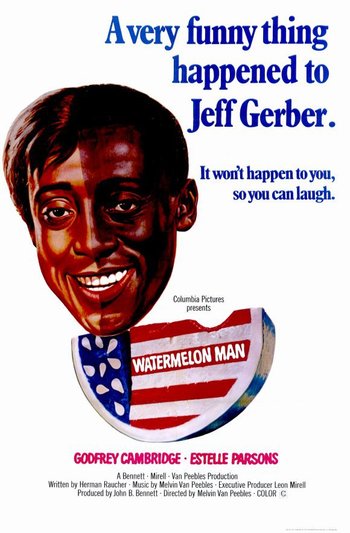 Watermelon Man is a 1970 American satirical comedy film directed by Melvin Van Peebles. Written by Herman Raucher, it's about an obnoxious and bigoted white insurance salesman named Jeff Gerber (played by Godfrey Cambridge, a pioneering black stand-up comic), who wakes up one morning to find that he has become a black man, to his own horror as well as that of his ostensibly liberal wife Althea (played by Estelle Parsons). The film's premise was inspired by Franz Kafka's The Metamorphosis and John Howard Griffin's autobiographical Black Like Me.

Van Peebles' only studio film, Watermelon Man was a financial success, but Van Peebles did not accept Columbia Pictures' three-picture contract, as he knew that no one was going to finance his following film: Sweet Sweetback's Baadasssss Song. The music for Watermelon Man, written and performed by Van Peebles, was released on a soundtrack album, which spawned the single "Love, that's America". In 2011, that single received much mainstream attention when videos set to the song and featuring footage of Occupy Wall Street became viral.