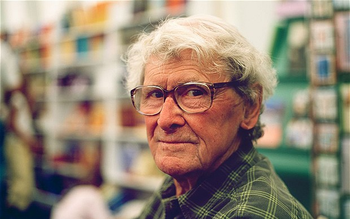 Ronald Gordon "Dick" King-Smith, OBE (27 March 1922 – 4 January 2011) was a prolific English author of children's books, mostly about animals. His single most famous book is The Sheep-Pig (published in the US as Babe: the Gallant Pig), which was the basis of the film Babe.
Advertisement:

Another of his books was the basis of the film The Water Horse. Harry's Mad was the basis for a live action TV series, as was The Queen's Nose (one of his few books not about animals) and The Foxbusters had an animated adaptation.

He also wrote a sequel to The Sheep-Pig, Ace, which was not the basis of the sequel to Babe. Ace tells of Babe's great-grandson Ace — so named because he has a spot on his side that resembles the Ace of Clubs — who has the curious and unique ability to perfectly understand human language. None of the characters from the original book appear, though Babe and the Hoggetts are mentioned a few times.