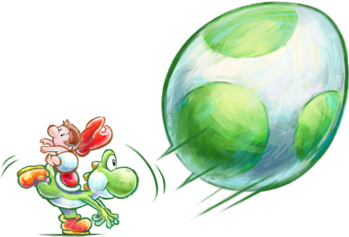 He already has a mouth to feed. He doesn't need another.
Advertisement:

Using the vessels of yet-to-be-born creatures as weapons.

The above sentence might sound horrifying, but it happens surprisingly often in media, especially video games. Thanks to their oval shape and portable aspect, it's not hard to imagine eggs as working projectiles. This is a particularly common form of attack from avian creatures, with some even being capable of rapid-firing them, while others are able to spit them out instead of... you know, the other way around. Additionally, laid eggs aren't necessarily fertilized ones: the cartons at the grocery, for instance, are more analogous to a chicken's period. Still, some variants of this trope may use fertilized eggs for added Black Comedy.

The eggs also don't necessarily need to be actual organic eggs to count. That's why explosives that are made to resemble eggs are a common variant, probably because they bring grenades to mind.

Compare Weaponized Offspring, which is when the eggs hatch into babies hell-bent on killing you. See also Egging for the prank involving throwing rotten eggs on people or their properties. Produce Pelting is a related trope, where someone (usually either a horrible performer, or a prisoner in Stock Punishment) has unpleasant food items thrown at them. Sub-Trope of Abnormal Ammo. Possibly a form of Edible Ammunition.