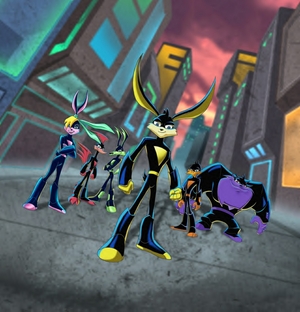 The Looney Tunes series of the 2000s.
It is the year 2772, and a meteor has struck the City Planet of Acmetropolis. Instead of destroying the planet, the meteor knocks the planet completely off its original axis upon landing in a harbour. From there, the meteor starts giving off large waves of supernatural energy that drastically altered the genetic code of several nearby residents, granting them unique powers and strengths. Under the guidance of the mysterious Zadavia, six of these newly empowered individuals are brought together to become the Loonatics. Together, these descendants of the original Looney Tunes gang must use their new powe—wait a minute, the descendants of who now?
Advertisement:

Loonatics Unleashed is an animated series that aired on Kids' WB! from 2005 to 2007 and is best known as one of the most polarizing entries in the Looney Tunes franchise. The show takes the classic Funny Animal characters and places them in a dark Cyberpunk universe as a Justice League-style team of superheroes who must fight off threats to their city, some of which resulted from the very meteor that gave them their powers.

The first season was a straight-forward action/adventure series wherein the only Looney Tunes characters were the Loonatics themselves and an Expy of Foghorn Leghorn, with all other villains and supporting cast being invented for the series. In response to criticism concerning the show's tone, and perhaps thinking the lack of Looney legacy links wasn't helping either, the second season underwent a heavy Retool, transforming the show into an action/comedy featuring nearly all the other prominent characters from the classic line-up, along with other nods to the franchise's history. This change failed to make enough of an impact and the show ended with 26 episodes, making it the shortest-lived of any television series in the franchise. note Not counting Tiny Toon Adventures spin-off The Plucky Duck Show, which was mostly repackaged segments of the former.