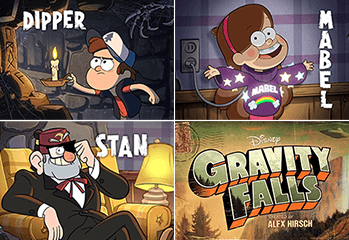 "Splinter taught them to be ninja teens (he's a radical rat)
Leonardo leads, Donatello does machines (that's a fact, Jack)
Raphael is cool but rude (gimme a break)
Michaelangelo is a party dude (party!)"
— Teenage Mutant Ninja Turtles (1987) theme songnote Each character appears on screen when their name is said
Advertisement:

At any point during an opening sequence, the main characters will appear, each in a separate shot, with their names beside them. There are many reasons for this, but the most common is simply so the audience knows who's who before the show actually starts. On occasion, especially in live action shows, the actor playing the character will also be listed.

In long running shows where characters are Promoted To Opening Titles, expect Evolving Credits. If two characters are introduced at once, that's Diagonal Billing.

Related to Framed Face Opening, Fun with Subtitles on occasion, Casting Gag also on occasion, and Boss Subtitles. For the version at the end of the show, see Video Credits.

Compare to - and sometimes used in conjunction with - Theme Tune Roll Call, where the opening theme of a show introduces the characters, often with shots of the characters as they are named by the song. See also Expository Theme Tune.