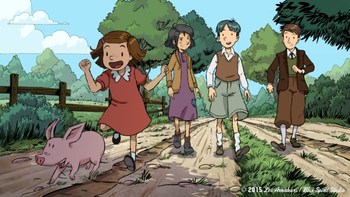 A ten episode animated series produced by Cyber Group Studios, Les Grande Grande Vacances in French or The Long Long Holiday in English, follows the adventures of Ernest and Colette Bonhoure, a pair of a siblings from Paris, during the events of World War II. While visiting their maternal grandparents in a village near Dieppe in Normandy, the German Army invades France, and Ernest and Colette must stay with their grandparents (semi)permanently, as their father's off fighting the invasion while their mother (who's sick with tuberculosis) is sent to a sanitarium over in Switzerland.

What was supposed to only be a short vacation ends up going on for five years (all but the first year of World War II). At the start of the series, Ernest is 11 while Colette's 6—by the end, Ernest is 16 and Colette's 11. During their time in Grangeville (the town that their maternal grandparents live in), Ernest and Colette meet new friends and help the French resistance fight the Nazi occupation.

It also has a comic book adaption released in 2019 with a rating of one/two releases every year.