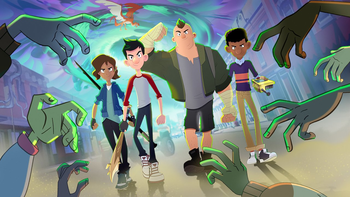 June: You are a dinosaur-sized doofus.
Jack: Maybe, but I'm telling you June, the apocalypse is better with friends.
Advertisement:

The Last Kids on Earth is a Netflix Animated Adaptation of the book series of the same name by Max Brallier. Scott D. Peterson, the story editor for Phineas and Ferb and Milo Murphy's Law, is the showrunner.

The story follows a 13-year-old boy named Jack Sullivan, an orphan, who lives in Wakefield, Massachusetts, when a strange phenomenon causes portals to open in the sky, dropping monsters on the city and causing zombies to appear. Left behind by his foster family, he survives for six weeks by living in his tree house and turning the whole apocalypse into a game to enjoy himself. Later on, he's joined by a number of people to help him survive the apocalypse: his best friend Quint, their former bully Dirk, his school crush June, and a dog-like monster they name Rover.

An action adventure game, The Last Kids on Earth and the Staff of Doom, came out on June 4, 2021 for PC, Nintendo Switch, and PlayStation and Xbox consoles.