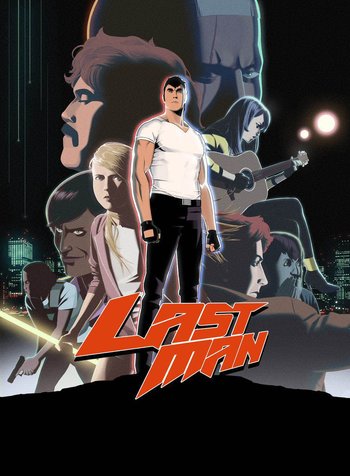 Lastman is a 26-episode series full of fighting, gangsters, and paranormal activity. It is a prequel to the comic of the same name.
Advertisement:

Richard Aldana is a deadbeat amateur boxer with little better to do with his time besides the occasional job here and there. He gets by with the help of his mentor Dave and others, but without any particular direction of his own. This all changes when his life is inverted and sent down the rabbit hole by events related to people and things he didn't know existed.

The series aired on France 4 on France and is available for streaming on Mondo Media's VRV channel in the U.S. The second season [[https://www.kisskissbankbank.com/fr/projects/crowdfunding-lastman-heroes?fbclid=IwAR04K0plEXJFMrtOuDlYMUa1h_GU2KIbESkpm1krEUgHoWUq0ARfTwh_pXg

Tropes Used In The Show: