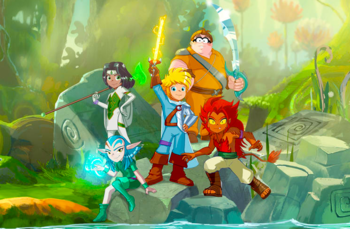 Les Légendaires is the animated adaptation of the comic book series of the same name produced by Technicolor Animation Productions. It currently airs on french channel Tfou.

Danael, Jadina, Shimy, Razzia and Gryf are a group of heroes known as the Legendaries who fight the forces of evil. When they accidentally broke the stone of Jovénia, it caused everyone in the world of Alysia to turn into children.