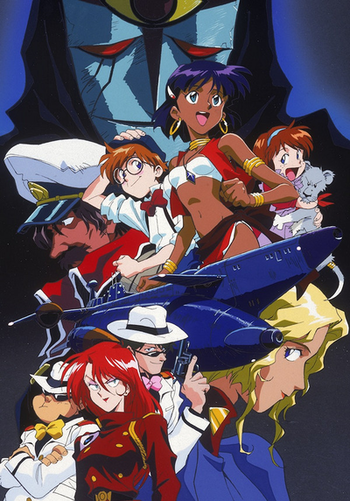 In your eyes I see a bright future...
"Je, wewe ni mjasiri ambaye, kwa kupite chini ye meporomoko ya moji yanayoitwa hatari, unetafuta ukweli wa hekaya unaojificha nyuma yake. Keme hyuyo, unitefute"
— From the original Swahili card
"Are you adventurers? Are you prepared to climb the blue waterfall named The Perilous? Do you seek the truth of the legend that lies therein? If you do, then you must first find me."
— Opening narration
Advertisement:

Set in 1889 and extremely loosely based on Jules Verne's 20,000 Leagues Under the Sea and many other of his works, Nadia: The Secret of Blue Water (original Japanese title: Fushigi no Umi no Nadianote Literally, "Nadia of the Mysterious Seas".) tells the story of Nadia, a girl who's trying to find out about her past, Jean, a boy who wants to build a flying machine, and the Blue Water, a mysterious gem of Nadia's with strange powers. Their world is home to two shadowy groups in conflict: Neo-Atlantis, who want to rule the world, and the crew of the submarine Nautilus, who have sworn to oppose Neo-Atlantis. These two plots are not unconnected...

This series, jointly produced by Studio Gainax, Group TAC and South Korean studio Sei Young from a concept of Hayao Miyazaki, originally aired starting in 1990 on NHK – Japanese public broadcasting (their equivalent of BBC). Carl Macek's Streamline Pictures released a VHS of the first eight episodes. Years later, ADV translated, dubbed, and released the entire 39-episode TV series (as well as the maligned, mostly forgotten movie sequel) on DVD. A series of humorous bonus featurettes were also released in LaserDisc as Nadia's Omake Theater during the original broadcast of the anime in Japan.

(Also little known: director Hideaki Anno, dissatisfied with the end results of the show, recut the show into a six-hour compilation released only in Japan called "The Nautilus Story.")

(Entry originally written by Rob Kelk for The Anime Primer

, and used with permission of the author.)

Just for the record, this series was the one that gave Hideaki Anno his first Animage Grand Prix before he penned out his biggest masterpiece, Neon Genesis Evangelion, which was even originally conceived as a Stealth Sequel to Nadia... and it's possibly the reason why NGE is such a Mind Screw. It has been purported that the stress of working on a tight schedule for a series over which he had almost no creative control was a key factor in precipitating Anno into a four-year-long bout of depression from which he emerged just before (some say while) doing Eva.

Nadia: The Secret of Blue Water provides examples of: