Anime / Nagi-Asu: A Lull in the Sea 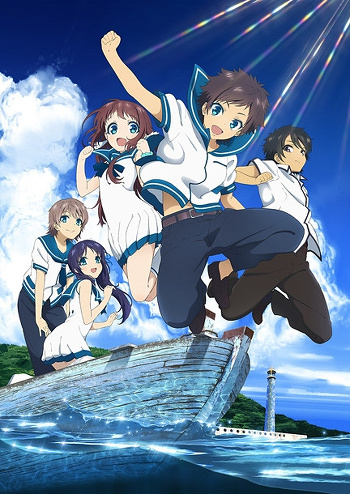 Nagi-Asu: A Lull in the Sea (凪のあすから — Nagi no Asukara) is a Fall 2013 Anime television series produced by P. A. Works.

Long ago, humanity lived in the sea. But the humans who longed for the land left the sea behind. They cast aside the special raiment they'd been given by the sea god that let them live in the ocean. The thinking of the sea humans and the land humans became as separate as the places they lived, and as countless time passed, they forgot they were once one people.

In the present day, Namiji Middle School in the sea is shutting down, forcing the four remaining students (Hikari, Manaka, Chisaki, and Kaname) to go to Mihama Middle School on the dry land. Things get even more complicated when Manaka makes friends with Tsumugu, a human boy who accidentally catches Manaka while fishing.

The anime series is also being adapted into a manga which is serialized in ASCII Media Works' Monthly Comic Dengeki Daioh manga magazine.

NIS America has the series licensed in North America under the Market-Based Title A Lull in the Sea, and was dubbed into English

, making it the 2nd NISA title to contain an all-new English dub (after Toradora!).