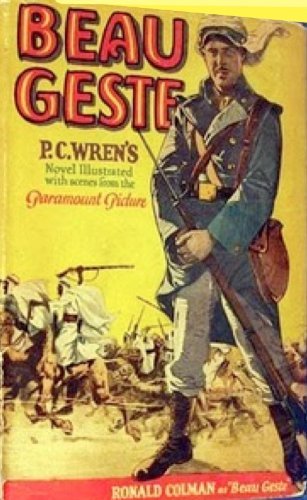 Beau Geste is a 1924 British adventure novel by Percival Christopher Wren. It details the adventures of the orphaned Geste brothers — Michael (also known as Beau), his twin Digby, and their younger brother John — in the French Foreign Legion. This novel is best known for its popularization of the Legion of Lost Souls trope.

It has been adapted several times for both stage and screen (including a 1926 silent film starring Ronald Colman and a 1939 sound version directed by William A. Wellman and starring Gary Cooper), and parodied numerous times more (such as a 1977 spoof directed by and starring Marty Feldman). The Goon Show play "Under Two Floorboards" is actually their version of this thing, not Under Two Flags.