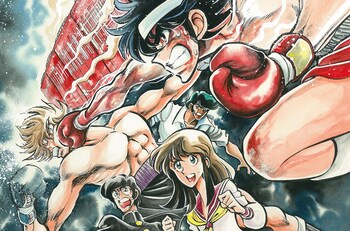 It's an average summer day, and New Transfer Student Noboru Takizawa is walking to his new school, eager to capitalize on the joyous "spring of youth" that high school allows him.

Then he takes one foot on the property and steps on a landmine. The next thing he knows, Takizawa is in a fight for his life with the insane hall monitor. Then after that he's roped into a volleyball game that ends up lasting several days (and with most of the court knocked out), and then he transfers schools into a school that uses a sensually-voiced mind-control device to pacify it's belligerent student body...

You get the idea.

Blazing Transfer Student (炎の転校生, or Honō no Tenkōsei) is a comedy-action-sports manga from Shimamoto Kazuhiko written from 1983 to 1985. The basic premise follows that of Hot-Blooded protagonist Takizawa as he is sent to schools with insane rules and or/evil faculty by his father, an agent of the Secret Board of Education. Using the power of his fists, a noble heart and some quick wit Takizawa sets out to make the school right again before being inevitably sent to the next. Accompanying him is Love Interest Yukari and rival for her affections Ibuki, who follow Takizawa from school to school (Yukari because she loves him, Ibuki because he wants Yukari for himself.) What follows is an extremely over the top parody of Shonen cliches of everything from Calling Your Attacks to Talking Is a Free Action. Despite this, the story is also a somewhat heartfelt examination of the importance of a proper education in a teenagers' life, and how treating them with the respect they deserve will allow them to become better people when they grow up.

A sequel series titled Blazing Transfer Students (or: Blazing Transfer Student Reborn) debuted on Netflix in 2017. It features the Japanese Boy Band Johnny's WEST in the role of the Seven Kakerus- seven transfer students embodying different shonen archetypes all named Kakeru. Together, they combat injustice in the form of taking up the mantle of the Blazing Transfer Student to rid Japanese schools of bureaucratic evil. The series is much lighter in tone and has less pronounced violence, as well as featuring a rotating Ensemble Cast that changes each episode. Ostensible main character Shigeoka isn't even the focus of the show every episode, allowing each of the cast to get some of the spotlight. It is available on Netflix.