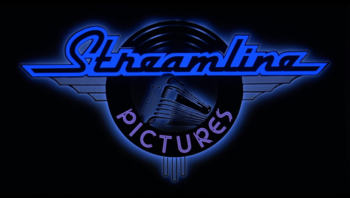 Founded in 1988 by Harmony Gold writer Carl Macek (the man associated, perhaps unfairly, with the Macekre) and animation historian Jerry Beck, Streamline Pictures was the first company to bring over and dub anime uncut on video in North America.note Contemporary US anime pioneers AnimEigo and Central Park Media would not start releasing product until slightly later, and Viz Media – although it did exist at the time as a manga distributor – would not venture into the animation market for another few years. While all of Streamline's dubs and productions were uncut, Carl Macek's script rewrites were designed to increase accessibility for American audiences, and this was usually more than enough to tick off the louder contingent of hardcore fans in the already-exhausting Subbing Versus Dubbing war. Despite the name behind the company, these were not Macekres with totally different character names and gratuitous edits. Needless to say, the scope of the changes varied by production, with some translations being more faithful than others.

Throughout the late 80's/early 90's, as other anime distributors began releasing subtitled tapes along with the better-selling dubbed versions, and then putting both versions on Laserdisc/DVD, Streamline Pictures stayed with the dub-only approach (since Macek firmly believed that releasing subtitled animation was pointless since the Japanese dialog was also technically dubbed). On their laserdisc releases and some of their DVD releases you can have both Japanese and English audio, but no subtitles. AKIRA and Twilight of the Cockroaches were the only releases with subtitled versions available (on TotC, the subtitles were done – poorly – by Macek himself). There were actually subtitles created for Vampire Hunter D, and their Miyazaki films, but they were only released as film prints (there were a few roadshows back around 1992). There also was one instance of Harmony Gold releasing subbed anime, as part of the Robotech Perfect collection which had two episodes of Robotech, and the corresponding two episodes of one of the three Japanese series that made it up with rather poor subtitles. Each set got approximately halfway through its source series.

Streamline also issued much of their early product in their original aspect ratio. Akira, Twilight of the Cockroaches, Lupin III: The Castle of Cagliostro, and The Professional: Golgo 13 were among them. Though most were later released by Orion Pictures in pan-and-scan format, one later release, Lupin III: The Mystery of Mamo, did get the letterbox treatment.

Due to the failure of Crimson Wolf in 1995 as well as Orion's financial problems, Streamline Pictures folded in 1997, just as DVD (and anime in general) was beginning to grow in popularity. The few DVD's Streamline put out prior to their collapse are extremely rare today.

After Streamline Pictures went under, other anime companies would pick up the rights to much of their catalog. Some companies (Urban Vision) chose to keep the Streamline dubs on their releases while others (Bandai Entertainment, Geneon) chose to commission new dubs. ADV Films did mostly the latter, but kept a few Streamline dubs. Recent releases of old Streamline properties by Nozomi Entertainment and Discotek Media (Eastern Star) have included Macek's dubs, even if a newer dub exists (in those cases, they try to include both). And of course, Disney decided to produce their own dubs of the Miyazaki films when they took over the Studio Ghibli catalog.

Most of Streamline's dubs were recorded at Screenmusic Studios (now Studiopolis) in Los Angeles, with a few being recorded at Wally Burr Recording or InterSound. Many of the company's voice actor pool would continue to work in dubbing/ADR for years afterwards, becoming well-regarded industry veterans. Some also moved into ADR writing and directing. Macek himself continued writing scripts for anime series and voice directing (including a dub of Aura Battler Dunbine for ADV Films) until his sudden death in 2010. One of the studio's employees, animation enthusiast Fred Patten, would go on to do a 18-part retrospective of the company on Beck's Cartoon Research, which can be found here

Note: on the later releases with the Streamline dubs, on the intro it will have Carl Macek's name on it.

List of dubs from Streamline (some of the shows were redubbed later):