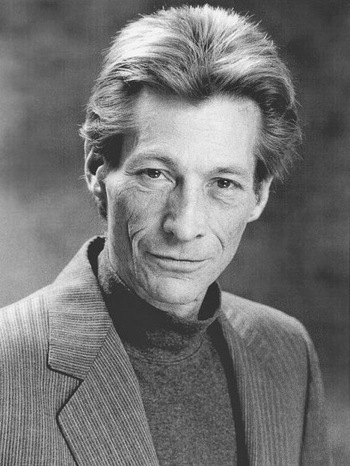 "I really sink my teeth into anything I’m doing, be it voice-over work, on-camera or onstage work, or directing and writing."
Advertisement:

An American actor with numerous voice roles under his belt, Robert Axelrod (May 29, 1949 – September 7, 2019) is best remembered by children of the 1990s as Lord Zedd, the Big Bad of Mighty Morphin' Power Rangers, as well as Finster, the shy, easily intimidated elf-thing responsible for spawning each Monster of the Week. However, Axelrod had a very diverse career in western animation, as well as in anime, stretching as far back as 1980. He also appeared in quite a few live-action roles, was one of Tim & Eric's regular cast members, and even popped up in the music video for Michael Jackson's "Stranger in Moscow".

Axelrod passed away at the age of 70 in 2019, from publicly undisclosed causes. It's known that he was suffering complications from spinal surgery, but also had prior health issues that may have been at fault. In spite of some difficulties, he had continued to attend conventions and encourage new prospective actors and writers until 2018, when his surgery took place. Many Power Rangers and anime fan groups held their own memorial services after his passing.

Some of Axelrod's most noted roles: