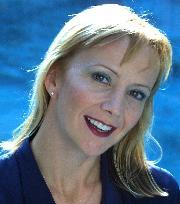 Who do you call when you want someone to voice a short or soft-spoken boy? Brianne Brozey, alias Brianne Siddall (born August 25, 1963 in Encino, California), of course, who has voiced Tsukasa from .hack//SIGN, Kunikida from Haruhi Suzumiya, Taro from Serial Experiments Lain, Mithos from Tales of Symphonia, Emizel from Disgaea 4: A Promise Unforgotten, Jr. from Xenosaga, Jim Hawking from Outlaw Star (under the pseudonym "Ian Hawk"), Lennon from Tweeny Witches, and Artful Dodger from Saban's Adventures of Oliver Twist.

Her voice acting career has sadly slowed down since a 2011 accident on the set of NCIS: Los Angeles (where she worked as an assistant location manager) which left her with severe neck injuries (for which she underwent surgery in 2015) and nearly took away her ability to speak. She remains active, however, doing primarily live-action work with the occasional voice role.