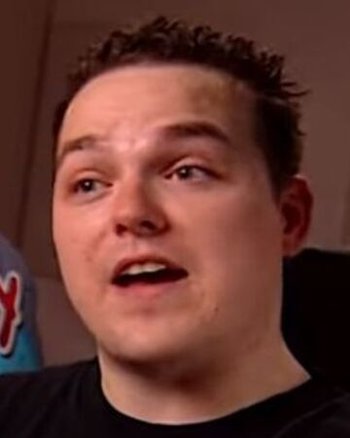 "What do I look like, some popcorn fairy?"
Advertisement:

Tony Sampson (born July 26, 1977) is a Canadian former Voice Actor who once worked with The Ocean Group in Vancouver, British Columbia, from 1991 to 2008. He is best known for his role as Eddy, the loud, short schemer from Ed, Edd n Eddy. Other notable roles include Touya Kinomoto, the other brother of Sakura Kinomoto, from Cardcaptor Sakura; Dex Oyama from MegaMan NT Warrior; one of Seikai's disciples in Inuyasha; Gengi Heita in Ranma ½, and Muguel Aiman from the Mobile Suit Gundam SEED franchise.

The only time Sampson got involved with anime was when he had a very rare guest at the March Toronto Anime Con in 2006.

Outside of voice work, Sampson also had occasional roles in live-action television and film as a teenager, including Keith/Flash in The Odyssey.

After the conclusion of Ed, Edd n Eddy in 2009, Tony retired from voice acting

and currently works in the oil sands industry at Fort McMurray. This was confirmed by fellow voice actor Samuel Vincent, who played Double-D in Ed, Edd n Eddy.