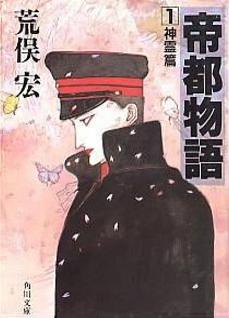 A historical fantasy novel series published from 1985-1987, and written by Hiroshi Aramata, Teito Monogatari (literally "Tale of the Imperial Capital") is a retelling of the history of Tokyo from an occultist perspective, beginning with the Meiji Era and going up to the end of the 20th century. Upon his death, the samurai Taira no Masakado cursed the new city and its inhabitants. Over the course of the next hundred years, numerous characters, both fictional and historical, come into conflict with Yasunori Kato, an immortal villain out to harness Masakado's spirit to destroy the city.

The novels won the Nihon Science Fiction Taisho Award in 1987, have sold around some 4 million copies in Japan alone, and are widely considered the first major work to popularize Onmyodo (Yin Yang) magic and Feng Shui in its native country. Of course the series immense success has resulted in several visual adaptations including films, manga and even a stage adaptation. In Japan, the most well known adaptation is the 1988 live action special effects film Tokyo: The Last Megalopolis. However because western audiences aren't as inviting to Japanese live action special effect heavy works (barring certain exceptions), the most known adaptation in the west is the heavily stylized, Darker and Edgier 1991 anime adaptation known as Doomed Megalopolis. Both adaptations are (very) abridged adaptations of only the first 1/3rd of the series.

The original work has received an abundance of literary extensions including prequels, sequels, sidequels and reboots. As for the cinematic adaptations, Tokyo: The Last Megalopolis would later receive a sequel in 1989 called Tokyo: The Last War. It was very loosely based on a later novel in the series and set during World War II. However, it was much lighter on the special effects and magic due to a smaller budget and a different director. Three spin-off movies were also produced. The first was Teito Monogatari Gaiden in 1995, which was even Darker and Edgier than Doomed Megalopolis. The second was Tokyo Dragon in 1997, an independent made-for-TV film based off Aramata's Sim Fu-Sui series which features the grandson of Shigemaru Kuroda (the Feng Shui expert from Teito Monogatari) in a starring role. The final one was The Great Yokai War in 2005, a family film by Takashi Miike that's decidedly the most lighthearted entry in the series.

The original novels were never published in English, but there is a campaign to get them translated.

Teito Monogatari provides examples of the following tropes. *Note that many of these tropes are specific to only certain adaptations, usually specified at the beginning of each entry: