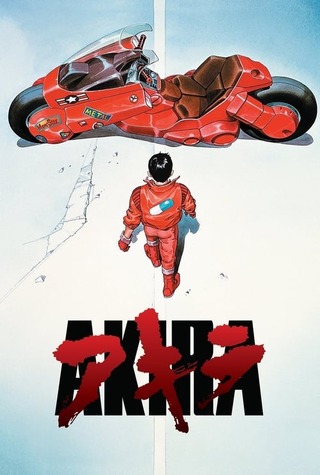 Neo-Tokyo is about to E.X.P.L.O.D.E.
"Heh, heh... what's happened to me? I must be dreaming. I feel like I can take out the world."
— Tetsuo Shima
Advertisement:

Akira (sometimes spelled AKIRA to differentiate between the work and the title character) is a post-apocalyptic sci-fi manga serialized in Weekly Young Magazine from December 1982 to June 1990. The most recognizable of Katsuhiro Otomo's works, it maintains a sizable influence on pop culture around the world, largely owing to the success and acclaim of its far better-known 1988 film adaptation by TMS Entertainment.

At 2:17 P.M. on December 6th, 1982 (July 1988 in the film)note The dates are exactly the date when the manga began serialization and when the film premiered in Japanese theaters, respectively, a mysterious black-domed explosion destroys Tokyo and sets off World War III. 38 (31, in the film) years later, the rebuilt city— now known as "Neo-Tokyo"— has fallen into decay, corruption, and crime.

During a night of civil unrest, as people take to the streets to protest the government, a turf war between two biker gangs rages, only to be halted when a hideously aged escapee from the government is nearly run over by one of the gangsters, using mysterious powers to defend himself and severely injuring the gangster — a young, nervous kid named Tetsuo from the Capsule gang. Moments later, the escapee is taken back into custody by the army; however, they also decide to take Tetsuo with them.

He then becomes the newest test subject for the "Akira Project", an initiative to imbue capable subjects with telekinetic powers. But when Tetsuo's powers awaken, the combination of an inferiority complex harbored since childhood and power beyond Tetsuo's wildest dreams wastes no time in driving him insane. He escapes the lab and goes on a super-powered rampage through Neo-Tokyo, and it falls to a handful of people, including Capsule leader and Tetsuo's friend Kaneda, to put a stop to the destruction.

As mentioned before, the manga received a highly acclaimed anime movie adaptation in 1988, directed and co-written by Otomo himself. It's widely different outside the above-mentioned premisenote mainly focusing on events from the first third of the manga, while simultaneously removing or incorporating plotlines from later in the manga as well as rewriting a few plot points, retooling certain areas of the manga into a thoroughly Mind Screw plot, and it's primarily known for its unusually lavish animation (even by modern standards) as well as for its groundbreaking soundtrack and its runtime being on the heftier end for an animated filmnote At 124 minutes, it was ranked as the 13th longest animated film ever made. The film proved invaluable in disproving the Animation Age Ghetto, at least for anime in the U.S., and is still considered a landmark production in animation and science fiction both at home and abroad. It has been dubbed twice into English, first in 1989 by Kondansha and distributed by Streamline Pictures (which lead to a misconception that Streamline produced it themselves) and then in 2001 by Animaze via Pioneer (later known as Geneon). A 4K remaster of the movie was released in 2020.

Being over 2000 pages in six hefty volumes, the story the original manga tells is much longer than the already-lengthy film, featuring even more violence and a greater focus on politics. Because the film was in development and saw its release while the manga was still running does show a bit, critical plot developments in the film often became Late Arrival Spoilers in the manga, but it also led to some characters and concepts that only saw a brief appearance in the film getting explored in greater depth by the manga. The series is notable for being the very first comic book series to utilize entirely computer coloring, when it was first released in the US by Marvel's Epic Comics in the late 80s/early 90s. Later English editions from Dark Horse and Kodansha Comics USA restore the original black-and-white artwork, but the pages remain flipped from left-to-right. For the 35th anniversary of the manga, Kodansha released a special box set with a 7th volume and with the original format of right to left reading.

An Americanized Live-Action Adaptation/Foreign Remake had been proposed in 2002, but it spent a long time in Development Hell with little progress made, with a lot of fans furious that the movie was even considered to be set in America. The project seemed to be officially cancelled in 2014 until it was announced the next year that Marco Ramirez (who has written for Daredevil (2015), Sons of Anarchy, Da Vinci's Demons, and Orange Is the New Black) was signed on to write a screenplay for a potential trilogy of films based on the manga. In 2019, Taika Waititi was signed on to direct, and had stated prior that he wanted to retain the original setting and hire a cast primarily made up of actors of Asian (preferably Japanese) descent. A synopsis also confirmed that the movie will take place in Neo-Tokyo. Unfortunately, it was put into limbo yet again when Waititi left production to work on Thor: Love and Thunder instead, resulting in the film losing its May 2021 release date. However, Warner Bros. are still reportedly interested in keeping Waititi involved.

open/close all folders
General
1988 Movie Only
Manga Only