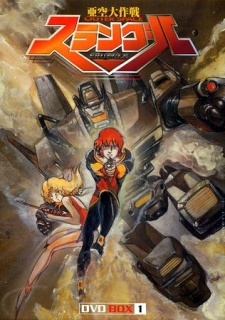 It is the year 86 of the New Galaxy. In a binary star system somewhere in space, there is a special area called Zone Subsqui, which converged all the races of the galaxy to form a new civilization. However, alongside the progress, crime flourished, and the Organization of Evil became the scourge of the new order, exhibiting powers above those of the space authorities. It was therefore decided that, to combat the Organization of Evil, a group composed of brilliant scientists and brave warriors would be created, known as Gorilla Force.

Originally created by Kokusai Eiga-sha (Movie International Co, Ltd.), this series was licensed by Saban and combined with Go Shogun to create "Macron 1".