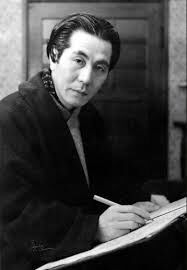 If you've never heard of this man, but have heard of Godzilla, then you should be ashamed of yourself. Akira Ifukube was a Japanese musician who is best known today for creating both the roar and the music for the king of the monsters, Godzilla. Yes, he created the Big G's roar himself. Ifukube was born on May 31st, in 1914, in Kushiro, Japan. Ifukube's interest in music started at a young age when he found an abandoned violin in a barbershop. Because his father refused to pay for him to have formal lessons for playing the violin, Ifukube taught himself how to play the instrument. During his time of self teaching, Ifukube encountered a recording by the Austrian violinist Fritz Kreisler, which also included music by Dvorak, Cui, and Tchaikovsky. Hearing this recording greatly moved Ifukube and led him to personally learn the pieces by ear.

On July 7, 1940, Ifukube personally conducted the premiere public performance of his first ballet, Etenraku. In the early days of WWII, Ifukube wrote many nationalist pieces such as Symphony Concertante (1941), and Ballata Sinfonica (1943). Ballata Sinfonica was dedicated to his late brother, Isao Ifukube. Ifukube was also commissioned to write martial music pieces such as Kishi Mai (1943) and Prelude du soldat (1944). Something that many may find interesting is that while Ifukube was resting in a hospital due to radiation exposure, caused by extensive use of X-Rays while examining a captured British war plane (he was chosen to examine the plane because of his scopic studies of wood during his university days) without a protective suit, he heard Kishi Mai play on the radio when General Douglas MacArthur arrived at Atsugi air base to formalize the Japanese surrender. Ifukube was embittered by the war and his radiation sickness, and refused to compose music again, until he heard a performance of his Ballata Sinfonica being played over a radio. He was inspired to return to composing music afterwards.

In 1946, Ifukube moved from Hokkaido to Kujira, Nikko, Japan. By this time he had developed a solid reputation as a music composer. Because of this, he was offered the position of music teacher at the Tokyo National University of Fine Arts and Music. Working there, he was soon hired by Toho to write film music. By 1947 he had scored his first film, Ginrei no hate (To the End of the Silver Mountains). This film was written by Akira Kurosawa and was Toshiro Mifune's first feature film. In 1954, Ifukube was asked by Toho to score a film directed by Ishiro Honda. That film was Gojira. This score became one of the most famous film scores in history and propelled Ifukube to heights of fame that no other Japanese film composer has ever reached. If you wish to compare him to John Williams, please keep in mind that Ifukube predated John Williams. It would be more appropriate to compare him to Jerry Goldsmith instead (even then he still predated Goldsmith. An even better comparison would be Elmer Bernstein, his nearest counterpart; Bernstein started five years after Ifukube scored his first film!) Ifukube regarded his score for Gojira as the best score he had ever written for a motion picture, although many of his fans would argue that his scores for King Kong vs. Godzilla (1962) and Godzilla vs. Mechagodzilla II (1993) may hold that position instead. Ifukube would go on to score dozens and dozens of films for not only Toho, but Daei as well. He composed the music for the Damajin films (some of which he recycled for the heisei Godzilla films), and many others, until his death in 2006. His last film score was for 1995's Godzilla vs. Destoroyah. Ifukube was quoted as saying that composing the music for Godzilla's death was like composing music for his own death.

Here's a short list of films that he's composed: Gojira (1954), Sora no Daikaiju Radon (Rodan) (1956), Chikyu Boeigun (The Mysterians) (1957), Daikaiju Baran (Varan, the Unbelievable)*1 (1958), King Kong vs. Godzilla (1962), Kaitai Gunkan (Undersea Battleship, or Atragon) (1963), Mothra vs. Godzilla (Godzilla vs. The Thing) (1964), Dogora the Space Monster (1964), Gojira, Mosura, Kingu Ghidorah: San Daikaiju Chikyu Saidai no Kessen (Three Giant Monsters' Greatest Battle on Earth, or Ghidorah, the Three-Headed Monster) (also 1964!), Kaiju Daiseno (Great Monster War, Invasion of Astro-Monster, or Godzilla vs. Monster Zero) (1965), Frankenstein vs. Baragon (Frankenstein Conquers the World) (1965), War of the Gargantuas (1966), Kaiju Shoshingeki (Attack of the Marching Monsters, or Destroy All Monsters) (1968), Godzilla vs. King Ghidorah (1991), the aforementioned Godzilla vs. Mechagodzilla II (1993), and his last score, Godzilla vs. Destoroyah (1995). Please note that this list is by no means complete and are just listing his kaiju works, he has composed for many other films.

1. Ifukube's score for Varan is probably his most recycled, with pieces (often modified, but sometimes left unchanged) appearing in dozens of other scores composed by him, such as Battle in Outer Space (1959), King Kong vs. Godzilla (1962) (If you pay attention and compare, you'll notice that the piece called "The Self Defense Forces Retreat" from Varan would later be reworked into Godzilla's theme for this film and 1964's Mothra vs. Godzila), Frankenstein vs. Baragon (1965), and countless others.