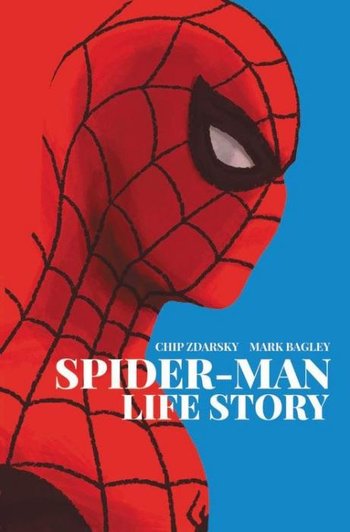 Spidey through the Ages.
Advertisement:

Spider-Man: Life Story is a six issue miniseries by Chip Zdarsky and Mark Bagley in 2019. It is an Alternate Universe / Elseworld series that explores how Spider-Man and his world would have looked had there been no Comic-Book Time and he aged in real-time from his first appearance at the age of 15 in Amazing Fantasy #15 (August 1962) all the way to The New '10s. The reality of this comic was originally designated as Earth-2447 before being established as Earth-19529.

In 1966, Peter has been Spider-Man for four years and has endured most of his adventures from the Lee-Ditko Spider-Man era. Now he is in college in the period when The Vietnam War is dragging on, slowly polarizing and dividing public opinion, and the superhero community. Peter's friend Flash Thompson has volunteered, while Peter has so far avoided getting called to the draft on account of being enrolled in college.

The first issue is set in The '60s and each issue after that moves a decade forward as it traces the cast of Spider-Man as they age in different periods. In April 2021, an Annual was announced, which focuses on J. Jonah Jameson throughout the decades.