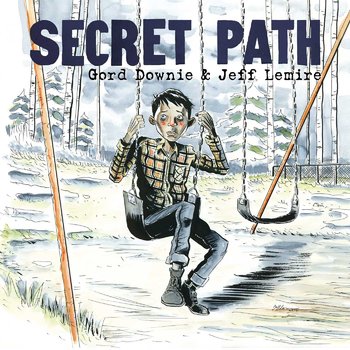 Secret Path is a Canadian Comic Book by Jeff Lemire, and part of a Canadian multimedia project centering around the Secret Path album by Gord Downie, which also includes an Animated Film.

(mistakenly called "Charlie" by his teachers) died next to a set of railroad tracks. He was taken from his loving family and brought to the Cecilia Jeffrey Indian Residential School. When he managed to escape, he tried to make his way back home on foot. His home was 400 miles away, but he had no way of knowing that. Thus, he had no choice but to walk.

The purpose of Secret Path is to raise awareness of the plight of Native Americans who have suffered like Chanie. In fact, the proceeds of the project went towards the Gordon Downie Secret Path Fund for Truth and Reconciliation.