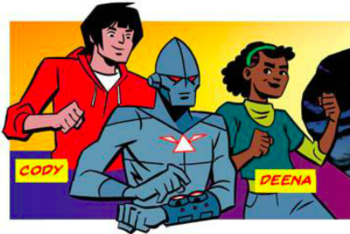 A superhero comic that has run in OWL since September 2018. It is written and drawn by Jay Stephens.

Cody Meekis is an ordinary student who one day discovers a high-tech suit buried in a construction site. The suit gives its wearer the powers of flight, telekinesis, and infra-red vision. Cody shares the discovery with his best friend Del Dixon. Together they restore the suit to working condition and, adopting the shared superhero identity of Arrowhead, test out the powers of the suit. Del's sister Deena overhears them talking about the suit, and confronting Cody with the knowledge, gets him to let her try it out. She shares her own discovery: a time travel device that was buried near the suit. From then on, she and Cody become the time-traveling superhero Arrowhead.

The comic's debut issue can be read online here