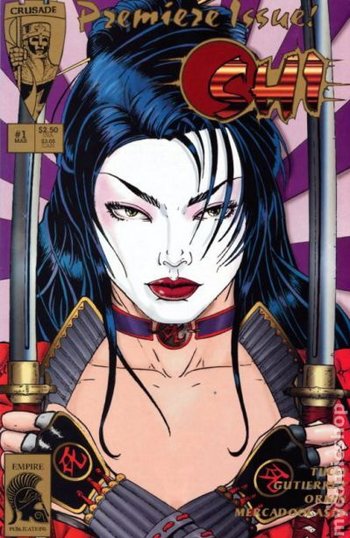 Thereby you can be the director...
of your opponent's...
FATE!
Advertisement:

Shi is a Comic Book series written by William Tucci and released in 1994 under his own publishing, Crusade Comics. The original run lasted 12 issues but the comic book gained enough fame to be considered as one of the most popular comic book action girls of The '90s, being published under Dark Horse Comics and Avatar Press between the 90s and the Turn of the Millennium (but later coming back to Crusader Comics) and having crossovers with famous characters as Wolverine, Grifter, Hellboy and Lady Death.

The story is about Ana Ishikawa, a half-Japanese half-American woman with a vendetta: avenge her father and brother at the hands of the Yakuza leader Masahiro Arashi who killed them when she was a child. Training for decades under her grandfather Yoshitora, a Warrior Monk, she goes into a Roaring Rampage of Revenge against Arashi and the Yakuza under the identity of "Shi" and becoming the "embodiment of death." In the end, thanks to the strong teachings of her Catholic mother, she just leaves him in jail and decides not to kill anymore, but keeps the "Shi" alter-ego for when it becomes necessary, fighting not just criminals but supernatural forces and even another "embodiment of death" like her.