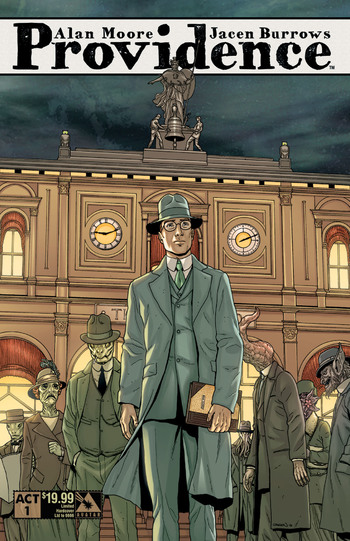 Robert Black and Company
"There is a concealed country, therefore, hidden below the society we show the world. Uncomfortable truth, it lurks behind our pretences. This truth, it is a land sunken beneath many fathoms."
— Dr. Alvarez
Advertisement:

Providence is a 2015 12-Issue series by Alan Moore and Jacen Burrows. It is published by Avatar Press.

Reporter and aspiring novelist Robert Black works for the New York Herald Tribune. One day in June 1919, he is asked to write a fluff piece for the newspaper, and uses it as a chance to meet Dr. Alvarez, whose literary criticism had impressed him. This meeting, coupled with personal tragedy, sends Black on a quest of introspection and self-journey. He decides that he will write that novel he wanted to write and quits his job to follow some leads investigating the Order of the Stella Sapiente and the mysterious Booke of the Wisdom of the Stars. The quest takes him to the heart of New England and brings him into contact with a gallery of interesting and sinister figures. Robert slowly spirals into the heart of a bigger mystery than anything he ever imagined, and the scope of the mystery slowly takes a hold on his sanity.

While the book is a Sequel and Prequel to Neonomicon and The Courtyard respectively (both were collaborations with Jacen Burrows), Providence is vastly more ambitious in its scope and intent. It is simultaneously a Homage to H. P. Lovecraft, a Sidelong Glance Biopic of the writer himself, as well as a Deconstruction and a Reconstruction of Lovecraft Country. Moore has stated that Providence is his most heavily researched work since From Hell and that Providence is going to become "my ultimate Lovecraft story".