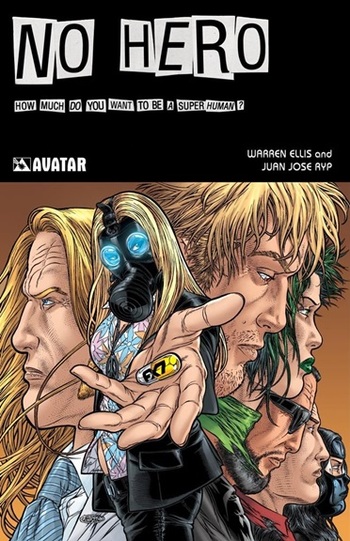 How much do you want to be a superhuman?
"I'm no hero, Ben."
— Joshua
Advertisement:

No Hero is the second super-hero miniseries from Warren Ellis at Avatar Press, and also his second collaboration with artist Juan Jose Ryp. The series started with issue #0 and lasted for 8 issues, from June, 2008 to September, 2009.

Taking place in 2011, the super hero group Front Line has just lost several members to attacks targeted at them, and are rushing to replace them when they find Joshua Carver, a young man who wants nothing more than to be a super hero. And he'll get his wish, if he can survive the process...

No Hero provides examples of the following tropes: