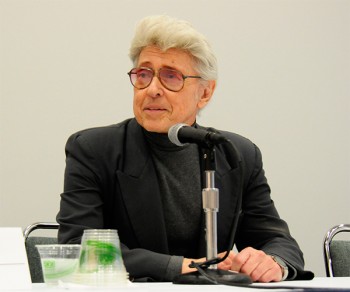 The man himself
Jim Steranko, many people consider the Jimi Hendrix of comic book art in the late 60s, because just like Hendrix, he came on like a comet, an overnight sensation, and, just like Hendrix, creates a body of work that its influence and impact is in converse proportion to the actual quantity of comics he turned out.
— Arlen Schumer, Superheroes: A Never-Ending Battle
Advertisement:

James F. Steranko (born November 5, 1938) just might be the most interesting man in the world.

He started drawing as a child on the back of discarded envelopes in between working in bootleg coal mines with his father in Pennsylvania. He started his art career in advertising before entering the comics industry in 1966, where he earned his reputation working for Marvel Comics at the birth of the "Marvel Age," after walking in and assuring Flo Steinberg (Marvel's secretary) that yes, Stan would definitely want to see his work. His work is remembered for infusing the medium with a large dose of hallucinatory surrealism, op art and graphic design sensibilities, creating something he dubbed "Zap Art."

What's even more remarkable is how little work his reputation rests on. His entire Marvel output includes his seminal run on Nick Fury, two issues of X-Men and three issues of Captain America, a single romance comic and a horror story, for a total of 29 issues. He also drew a bunch of covers that have been referenced so often, you'll recognize them instantly, and designed the classic X-Men logo.

Outside of his comics work, he worked as a production illustrator, and among other things, drew the original Indiana Jones concept art. He also designed for Francis Ford Coppola's Bram Stoker's Dracula. He wrote "The Ties That Bind", an episode of Justice League Unlimited, featuring Mister Miracle, a character Kirby based on him.