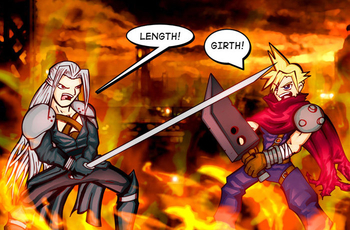 It's not the size that counts, it's how you use it!
Image

"How come you park a tank outside the studio?"
"'Cause I got a really small penis?"
— Mark Gerhard during an interview
Advertisement:

Like building an Evil Tower of Ominousness or wielding a BFS or BFG, there are just some things that have to make other characters wonder if a male character must be compensating for certain other inadequacies.

Despite the joke, sometimes bigger really is better, in a non-Freudian way, especially in fights. In these cases, you're not Compensating for Something, you're sane. Usually.

Theorized by some to be the reason Heroes Prefer Swords.

If you actually have a small penis, it would unfortunately make you an Acceptable Hard Luck Target.

See also Phallic Weapon, Mid-Life Crisis Car. This can be gender-inverted, though rarely, if a woman is trying to compensate for something like A-Cup Angst or a ticking Biological Clock. And of course, a similar phenomenon can occur with male or female examples of The Napoleon, who often try to compensate for lack of inches in a different context (cf. Small Girl, Big Gun).

The examples are limited to In-Universe. Please do not add your own speculations.

Alternative Title(s): Not Compensating For Anything