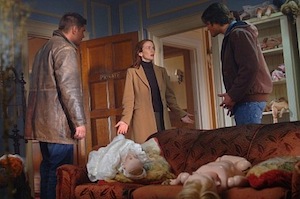 I mean, he loves them. He's not gonna tell you this, but he's—he's always dressing 'em up in these little outfits and, um, you'd make his day. —Dean about Sam
Sam: [to Dean, who wants to check whether Rose really had a stroke] What do you want to do, poke her with a stick? [Dean half-nods, obviously thinking it's a good idea] Dude, you're not gonna poke her with a stick!

People keep dying in odd accidents at an inn in Cornwall, Connecticut

, run by a single mother whose daughter has an odd friend.

Sam and Dean have been unsuccessfully investigating Ava Wilson's disappearance in Peoria, Illinois

for the last month. Ellen calls Sam with a possible case: mysterious deaths at Pierpont Inn in Cornwall, Connecticut. At a dead-end with Ava's disappearance, the brothers decide to check into the inn. They find out that the inn is about to be closed and is owned by Susan Thompson. Susan has a daughter, Tyler, and a mother, Rose, who recently suffered a stroke. They also have an extensive doll collection, including a dollhouse replica of the inn. Tyler has a friend, another young girl named Maggie.

A lawyer from the company that bought Pierpont Inn and is planning to demolish it is staying overnight in one of the rooms. He is found dead by one of the maids, hanging from a ceiling fan, which is eerily mirrored by one of the dolls in the dollhouse. Dean returns to the hotel room to tell Sam about the death and finds Sam drunk. Sam reveals his guilt about Ava's disappearance and his desire to save people in order to keep himself from becoming evil and joining the Yellow-Eyed Demon. He makes Dean promise to kill him if it becomes necessary.

The brothers see five-points in the inn and think the deaths may be the result of a Hoodoo curse, but when the brothers find out Rose had a sister named Margaret who died in drowning accident, they realize that Maggie is a vengeful spirit that Rose had been controlling with Hoodoo. Now that Rose is debilitated by a stroke, Maggie has been killing people to keep the inn from closing. The brothers save Susan when the ghost tries to run her over with a car, but then Maggie tries to drown Tyler in the pool so that Tyler will stay and play with her "forever and ever and ever". While Maggie is holding Tyler under the water, Maggie seems to hear someone calling her and disappears, allowing Sam to rescue Tyler. Rose communicates to Maggie that she will stay with her if she lets Susan and Tyler go, and Maggie agrees. Susan finds her mother Rose dead, but Tyler no longer sees Maggie.

For this episode = 3 humans