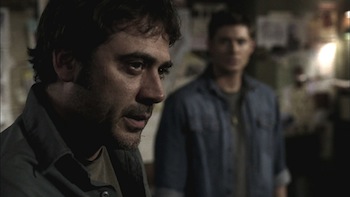 It starts in Arizona, then New Jersey, California. Houses burned down to the ground. It's going after families, just like it went after us.
Dean: [to Sam] I mean it. If hunting this demon means you getting yourself killed—then I hope we never find the damn thing.
Advertisement:

John Winchester has tracked the demon to Salvation, Iowa

. He and his sons are determined to kill the demon and save the mother of a six-month-old infant.

Sam, Dean, and John make plans to kill the demon who killed Mary Winchester after tracking his movements to Salvation, Iowa, where they think he will target another mother of a six-month-old child. Sam has a premonition that gives them a chance to save the Holt family from the same tragedy the Winchesters suffered. But before they have a chance to confront the demon, Meg starts murdering the Winchesters' friends and allies and demands that they turn over the Colt if they want her to stop. John agrees to meet Meg in Lincoln

, leaving his sons to deal with the demon using the real Colt. John tries to pass off another antique gun as the Colt, but Meg's associate, Tom, shoots her and reveals that the gun is a fake, and John is captured. Sam and Dean are able to rescue the mother and the infant Rosie Holt, but the Yellow-Eyed Demon escapes.

For this episode = 2 humans (both hunters and close friends of the Winchesters).