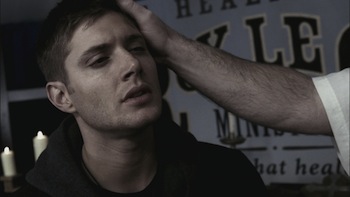 Pray with me, friends.
Dean: Why? Why me? Out of all the sick people, why save me?
Roy: Well, like I said before, the Lord guides me. I looked into your heart, and you just stood out from all the rest.
Dean: What did you see in my heart?
Roy: A young man with an important purpose. A job to do. And it isn't finished.

While rescuing two children from a rawhead, Dean gets electrocuted and develops a heart condition that will kill him within a few weeks. Sam finds a faith healer who is actually able to cure the skeptical Dean, but the brothers soon discover that, thanks to a captive Reaper, every life saved by the healer comes at the expense of someone else in the town—someone whom the person controlling the Reaper doesn't "approve" of.

For this episode = 3 humans and 1 rawhead.