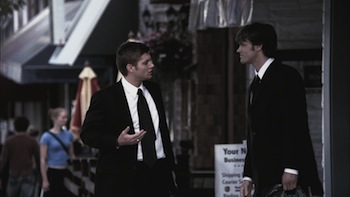 Homeland Security. It's pretty illegal, even for us.
Sam: What is that?
Dean: It's an EMF meter. It reads electromagnetic frequencies.
Sam: Yeah, I know what an EMF meter is. But why does that one look like a busted-up Walkman?
Dean: [smugly] Because that's what I made it out of. It's homemade.
Advertisement:
Sam: Yeah, I can see that.

contacts Sam and Dean to investigate a suspicious plane crash.

A passenger who is nervous about flying is possessed by black smoke and seems transformed. 40 minutes into the flight, he opens the airplane door causing the plane to crash.

Dean gets a call from Jerry Panowski, an air traffic controller that John and Dean had previously helped with a poltergeist. He tells them about the unexplained plane crash, and they analyze the cockpit voice recorder and hear EVP saying, "no survivors". In actuality, 7 of the more than 100 people aboard the plane survived. The Winchester brothers interview a survivor and hear about the strange passenger who opened the door. They then impersonate Homeland Security agents so they can examine the crash debris and find sulfur on the emergency exit door handle.

The pilot who had survived the crash is nervous about taking up another plane, until he is also possessed by the black smoke. He takes up a small plane that crashes 40 minutes into the flight. The Winchester brothers realize that a demon is causing these crashes and is now going after the survivors.

The only survivor planning to fly is a flight attendant, Amanda Walker. After failing to stop her from getting on the plane, the brothers board the plane themselves, despite Dean's fear of flying. 28 minutes into the flight, they realize the co-pilot is possessed. With Amanda's help they bind and gag him and douse him with holy water. Sam starts an exorcism, but once the demon has been forced out of the co-pilot and assumes its smoke form, it possesses the plane itself. Before the demon can crash the plane, Sam finishes the exorcism and sends the demon back to Hell, and the plane is able to return to the airport.

Jerry Panowski thanks Sam and Dean for what they did, and Dean asks him how he got his number. Jerry explains that John Winchester's voicemail says to call Dean for emergencies.

For this episode = At least 95 humans.