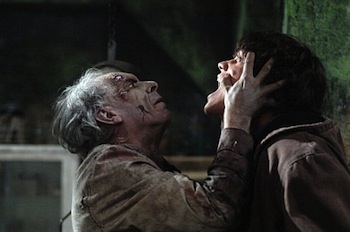 Don't be afraid. I'm going to make you all better.
Kat: So how do you guys know about all this ghost stuff?
Sam: It's kind of our job.
Kat: Why would anyone want a job like that?
Sam: I had a crappy guidance counselor.
Advertisement:

The boys investigate Roosevelt Asylum in Rockford, Illinois, an insane asylum abandoned after the patients rioted and 52 patients were killed, after they receive a text with the coordinates 42, -89. They presume the text is from their missing father and find a newspaper account about a police officer who killed his wife and then himself after investigating teenagers trespassing at the asylum.

Sam and Dean investigate the asylum and find two teenagers who were also exploring but had run into some of the ghosts of patients. The patients seem to be trying to tell them something. They discover that the chief of staff of the hospital at the time of the riot, Dr. Sanford Ellicott, was experimenting on his patients and trying to increase their rage. Dr. Ellicott gets a hold of Sam and after this Sam tries to kill Dean. Sam also vents a lot of his frustrations against Dean for following their father's orders without question. Dean manages to knock out Sam and burn Dr. Ellicott's bones. Sam returns to himself, and in the last scene he answers the cell phone to find their father has finally called them.