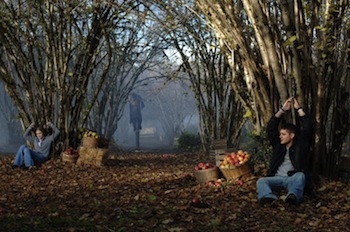 I hope your apple pie is freakin' worth it!
Dean: How'd you get here?
Sam: I, uh...stole a car.
Dean: That's my boy!
Advertisement:

Sam and Dean argue, and Sam decides to take off on his own hitchhiking to find their father in Sacramento, California

, while Dean investigates the disappearances of couples driving through Burkittsville, Indiana

The brothers get a phone call from their dad. A fight over whether they should follow their father's orders results in the brothers splitting up: Dean heads to a small town to help solve the disappearances of young couples, while Sam continues searching for their father. While hitchhiking, Sam runs across a young woman named Meg and they strike up a friendship. Meanwhile, Dean discovers that the couples are being sacrificed to a Vanir by the townsfolk, and is chosen to be the next sacrifice along with a local girl. Having had a change of heart, Sam returns in time to rescue them, and they burn down the sacred tree that kept the Vanir returning. At the end, it's revealed to the audience (though not to the brothers) that Meg is more than she seems: after accepting a ride from a trucker, she slits the man's throat, collects his blood in a goblet and uses it to communicate with an unknown supernatural being.