WARNING! Contains spoilers for the series up to Season 10! Some other spoilers may be unmarked!

open/close all folders
Gods In Supernatural

"Your story. Not ours. Westerners, I swear—the sheer arrogance. You think you're the only ones on Earth? You pillage and you butcher in your God's name. But you're not the only religion, and he's not the only God. And now you think you can just rip the planet apart? You're wrong."
- Kali in "Hammer Of The Gods" (S05, Ep19). 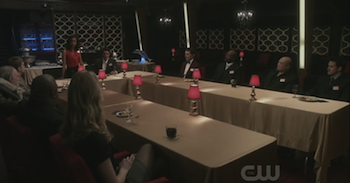 Before we get down to brass tacks, some ground rules. No slaughtering each other. Curb your wrath. Oh, and uh, keep your hands off the local virgins. We're trying to keep a low profile here.

The Gods of Supernatural come from a variety of religions all over the world. Most of them share certain characteristics, such as feeding on humans to survive and do not go to Purgatory upon death like monsters nor do they go to Heaven or Hell. It has not yet been explained where they come from or how they fit in with the larger world. The God of the Abrahamic religions is an entirely different being. He is far more powerful without relying on worship, the father of the angels, and the major deity in Supernatural, which is heavily influenced by Judeo-Christian tradition.

However, there are many other gods who appear through the series. Some may be referred to as pagan gods from the polytheistic traditions of Europe and North Africa, who no longer have the same amount of tribute and sacrifices they once had, causing them to turn to alternative methods of finding sustenance and worship. Others are gods of religions which are not of the Abrahamic tradition, and still have many worshipers today, including Indian and traditional folk religions.

Tropes about Supernatural gods in general:

The primordial entities are beings that have existed since before the universe even began. Generally, they are the most powerful beings in existence (or nonexistence in the case of the cosmic entity that presides over The Empty). As such, they tend to be virtually omnipotent and omniscient.

Note that because there are so many spoiler-y things associated with the primordial beings, all spoilers are unmarked. There is simply no way to discuss them without revealing much of the plot, especially in the later seasons. 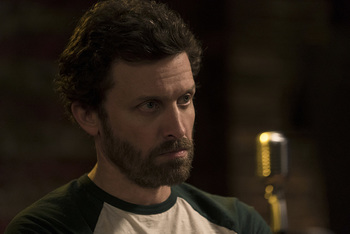 Well, there's only one explanation. Obviously, I'm a god... I'm definitely a god. A cruel, cruel, capricious god...
Dean: If there's a God, what the hell is He waiting for, huh? Genocide? Monsters roaming the earth? The freaking Apocalypse? At what point does He lift a damn finger and help the poor bastards that are stuck down here?
Castiel: The Lord—
Dean: If you say "works in mysterious ways," so help me, I will kick your ass!
- From "Are You There, God? It's Me, Dean Winchester." (S04, Ep02).

The creator of the universe Himself. He's absent for most of the series and actively avoids the numerous potential world-ending conflicts caused by His Angels and other forces, until He reveals that He's been disguising Himself as the prophet Chuck Shurley. He is the younger brother of Amara as well. 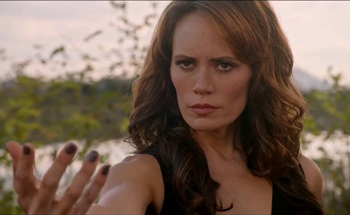 I was the beginning, and I will be the end. I will be all that there is.

The Darkness, also known in human form as Amara, is the embodiment of destruction and the one who existed before Creation. She is the older twin sister of God and is the oldest supernatural being in the series universe as she even precedes God and Death.

The oldest of the four horsemen and a being that embodies the force of death for all life. He is almost as old as God and has power nearly a match. For more information of this character look under the reapers section linked here.

Advertisement:
Archangels
The first beings God ever created and the most powerful of all angels. Older than the universe, they helped God lock away The Darkness so the universe could be made. While not explicitly primordials (all of the primordials spontaneously came into existence as the need for them arose) they are primordial beings and stated by God as being made of "The stuff of primordial creation". Essentially, they are constructed to be like primordials and posses low-level (compared to being like God or Amara) Reality Warping power. For more information, check the character section on archangels linked here.
The Shadow 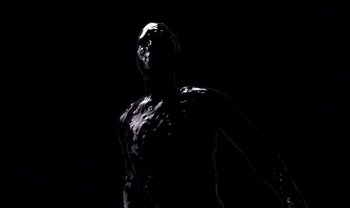 The Shadow: Before God and Amara, creation, destruction, Heaven, Hell, your precious little Earth, what was there?
Castiel: Nothing.
The Shadow: Yes. That's right. Nothing. Nothing but empty and you are soaking in it. Angels and demons, you all come here when you die (...) sleeping an endless, peaceful sleep.

The mysterious ruler of the Empty. 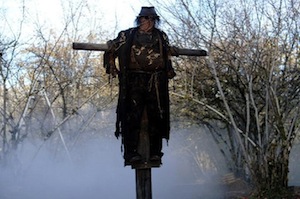 In Norse Mythology, the Vanir are a group of gods associated with fertility, prophecy, and wisdom. In Supernatural, an unnamed Vanir is brought by immigrants to Burkittsville, Indiana, by planting a tree that the town terms the "First Tree" in an apple orchard. Every year, the townspeople sacrifice a man and a woman, usually people passing through the town, to the Vanir in order to ensure the prosperity of the town. 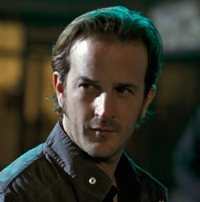 In myth and folklore, The Trickster God who breaks conventions or defies the rules of the gods, usually in a non-malicious and humorous manner. An example from Norse Mythology is Loki, a Shapeshifter who often seems to work against the other gods, and was eventually bound by the entrails of his own son. In Norse Mythology, Loki had many children, and was father to Hel, Fenrir, and the Midgard Serpent, and mother to his steed, Sleipnir. In Supernatural, the Trickster is able to warp reality and uses this to knock down the high and mighty in amusing ways, as well as to create a hedonistic lifestyle for himself. He enjoys antagonizing Sam and Dean, but usually is also trying to teach them a lesson.In "Changing Channels" (S05, Ep08), we find that he is truly Gabriel, who apparently killed the original Trickster/Loki and assumed his identity when he abandoned Heaven. Or so we are led to believe. Gabriel actually made a deal with the real Loki to assume his identity, who is still around after the Apocalypse.

"I don't know what everybody's getting so worked up about! 'Cause it's just a couple of angels having a slap fight! There's no Armageddon. Everybody knows, when the world comes to an end, the Great Serpent Jormungandr rises up, and I myself will be eaten by a big wolf!"

"Now we all know why we're here. The Judeo-Christian Apocalypse looms over us. I know we've all had our little disagreements in the past. The time has come to put those aside and look toward the future. Because if we don't, we won't have one."

Ganesh (God of Education and Learning)

"Kill 'em? What, so the angels can bring them back again?"

Mercury (Roman Messenger God and a God of Sex) 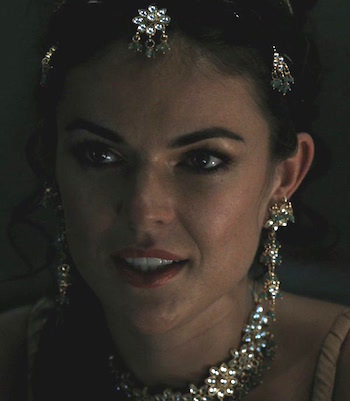 "The tongue... is the tastiest part. It's where the lies roll off."

In Classical Mythology, Veritas, the daughter of Saturn and the mother of Virtue, wore white and was so elusive that she hid in the bottom of a holy well. While in Roman Mythology Veritas is the embodiment of one of the principle virtues, in Supernatural she is an evil goddess who uses brutal honesty to kill those who ask aloud for the truth and then consumes their bodies as her tribute. She especially enjoys eating the tongues of her victims. Her desire for worship has lead her to assume the role of a broadcast journalist in Calumet City, Illinois,

Atropos (One of the Three Fates)

Atropos, One of the Three Fates (Katie Walder) 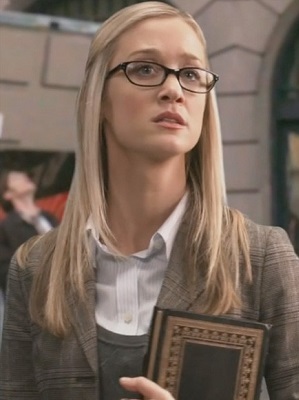 "All I know is all I do is die, so if you want to shoot me, shoot me. Just promise me you finish the job, 'cause I can't take this anymore." 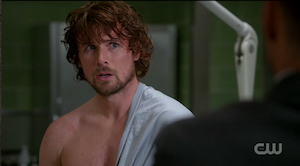 Prometheus is a proto-god, a Titan. In Classical Mythology, he was a son of the Titan Iapetus by Clymene, one of the Oceanids. He was brother to Menoetius, Atlas and Epimetheus. He is credited with shaping man from clay and stealing fire from the gods for humans to use, which allowed humans to create civilization and technology. Zeus punishes him for this theft by chaining him to a rock on the side of a mountain and sending Zeus's eagle to eat Prometheus' liver everyday.

The Prometheus in Supernatural is freed from from the mountain during an avalanche around 2005, but continues to die everyday for a few hours and have his liver eaten by an eagle only to be resurrected and have the same events occur the next day. He met a woman, Hayley, whom he helped rescue from the avalanche, and they had a son, Oliver. Due to his repeated deaths and resurrections, Prometheus does not remember who or what he is and is called "Shane." Zeus blames Prometheus for the Greek gods losing power and continues to hunt him, while the Winchester brothers try to break the curse of dying everyday, which afflicts Prometheus as well as his son Oliver.

"You were once my father. Now you're someone else." 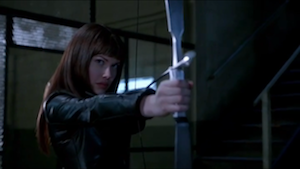 In Classical Mythology, she is the daughter of Zeus and Leto, and twin sister of Apollo. She is the goddess of wildlife and the hunt. The Artemis in Supernatural was tasked with hunting down Prometheus after he escaped from the mountain by her father Zeus, but Artemis was secretly in love with Prometheus and did not pursue him until a newspaper article describing him as a zombie forced her hand. 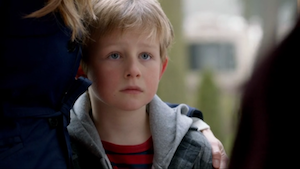 Oliver is the son of Prometheus/Shane, a Greek Titan, and a human woman, Hayley. He was born around 2006 and raised by his mother who tried to find his father for assistance when Oliver started dying everyday only to be resurrected after a few hours. It is unclear if he has any of his father's superhuman abilities or only inherited the curse.

Zeus (King of the Greek Gods)

Zeus, King of the Greek Gods 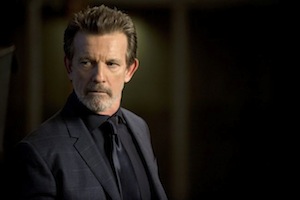 "I must admit, I could never have conceived such a horrible fate for such a beautiful child. Just goes to show, we must all leave room for happy accidents."

In Classical Mythology, Zeus is the King or the Father of the Olympian gods. Zeus is the child of Cronus and Rhea, and in most traditions, he is married to Hera. He had many heroic and godly offspring, including Artemis. He is the god of the sky and thunder. The Zeus in Supernatural blames Prometheus and his theft of fire for the downfall of the Greek gods. He is determined to punish Prometheus and Prometheus's son Oliver for all that the Olympian gods lost.

Osiris (King of the Afterlife)

Anubis (Guardian of the Dead)

The Egyptian God of the Dead and Osiris's son. After God left Heaven, Anubis is given the job to judge which afterlife humans will go after they die.

Leshii (The Master of the Forest)

Leshii, the Master of the Forest (Paris Hilton and others)

A Lovecraftian-esque deity who rules over an alternate dimension with her mate, Glythur.