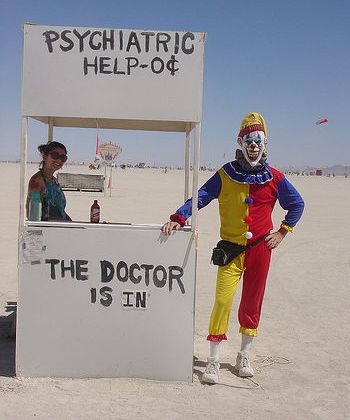 Sometimes There Are No Therapists... and sometimes you'll only wish there weren't.

Mental illness or psychological trauma can be serious, damaging issues that may need many months, if not years, of serious and dedicated care from a highly trained and understanding professional. This trope is what happens when you take those professionals and add a sprinkle of Ax-Crazy, Torture Technician, and Manipulative Bastard. Psycho Psychologists are therapists who really should not be a therapist; at best they will display a criminally negligent Lack of Empathy with the patient and either grow callously frustrated with dealing with other people's problems, or give them horrible and often self-destructive advice; at worst, they will have sinister, ulterior motives and actively abuse the relationship, possibly making their hapless victim an Unwitting Pawn in some evil schemes, or perhaps deliberately sabotaging their fragile mental state out of sheer spite or sadism.

Expect them to be found at a Bedlam House and utilize electroconvulsive therapy, Lobotomy, Mind Rape, Brainwashed and Crazy and More than Mind Control too often, but they can also be found in more humanistic forms of therapy like counseling or Freudian therapy.

Psycho Psychologists aren't even limited to psychology-related settings. They may be recruited by the Big Bad to mastermind the Mind-Control Conspiracy; they might be employed by the Secret Police to create the Manchurian Agent; they may put their considerable skills and training to use as a Diabolical Mastermind. Or maybe the years of listening to other people's problems have simply driven them over the edge. The nuts and bolts of this trope is mostly a psychologist who is, quite simply, either evil or crazy, however they put their abilities to use.

Sub-trope of Mad Doctor, if they are psychiatrists, or Mad Scientist, if they are psychologists; see also The Shrink and Morally Ambiguous Doctorate. Compare with the evil variant of Warrior Therapist, who crushes your will on the battlefield, not the sofa. See also Orderlies are Creeps. In extreme cases, see Dr. Psych Patient, where a patient impersonates or is mistaken for a psychiatrist.