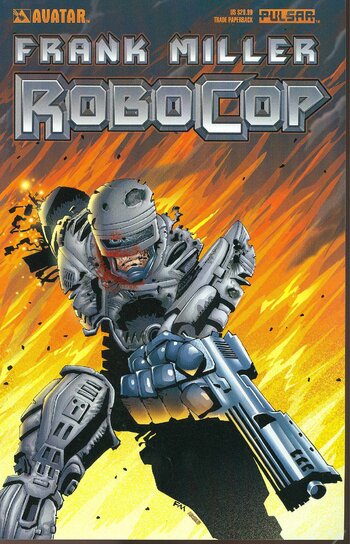 In 1987, Orion Pictures had a hit in RoboCop (1987) and naturally, they wanted a sequel. Unsatisfied with original writers Edward Neumeier and Michael Miner's ideas for a sequel, called "Corporate Wars" (that'd later become the loose basis for the pilot of RoboCop: The Series), and due to the duo getting involved in the 1988 WGA strike

, Orion turned to Frank Miller, fresh of his success on Batman: The Dark Knight Returns, to write the sequel. However, even then, they considered the script to be "unfilmable" and it was rewritten to what'd actually become RoboCop 2.

However, the script became the stuff of legends and thus was born Frank Miller's RoboCop, a comic miniseries by Avatar Press from 2003 to 2006, written by Steven Grant and drawn by Juan Jose Ryp. Reception to the comic has been mixed, with some thinking that the original script was better than what was actually released for 2 and others thinking it was a good thing Orion intervened.

Boom Studios later obtained the license for RoboCop and chose to adapt Miller's original screenplay for RoboCop 3. Steven Grant returned to adapt the screenplay into a 7-part miniseries with art by Kurt Otzkein.