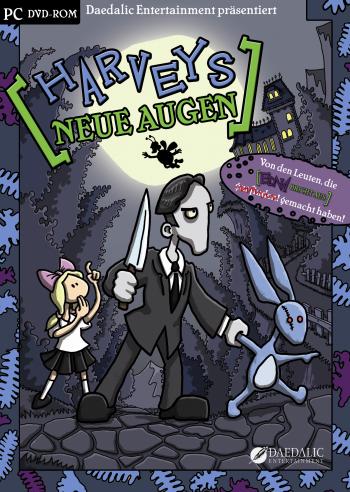 “Hello, adventure game fans. The spyware that we have installed on your computers is telling me that a lot of children are sitting at the monitors tonight. That’s why I won’t be telling the story I had originally planned. That’s really too bad. It would have been a good story, full of entertaining explosions and a giant robot opossum, but also with a lot of expletives and gratuitous violence. The story I’m going to tell you instead is a little different. It is about Lilli, the best-behaved girl in the whole world…”
— The Narrator, introducing us to the game
Advertisement:

Lilli is a sweet and innocent child—at least, that's what the narrator claims—and it is her supreme misfortune to live in the most hellish convent school imaginable. Mistreated by the other students, and despised by the child-hating mother superior, her only friend is the escaped mental patient Edna, who hides in her room and gives her advice. But after a bout of accidental bad behavior, the sinister experimental psychologist Dr. Marcel is invited to the school to perform therapy on the children. It's up to Lilli to help Edna to escape—and later, to free herself from the doctor's control.

Who is Dr. Marcel? What is his connection to Edna? How can he be stopped?

And what are those strange little gnomes that appear whenever a student goes missing, covering things up with pretty pink paint?

Edna & Harvey: Harvey’s New Eyes (Harveys neue Augen in German) is a spin-off of Edna & Harvey: The Breakout. The English version is available on Steam

Tropes featured in this game include (spoilers ahoy!):