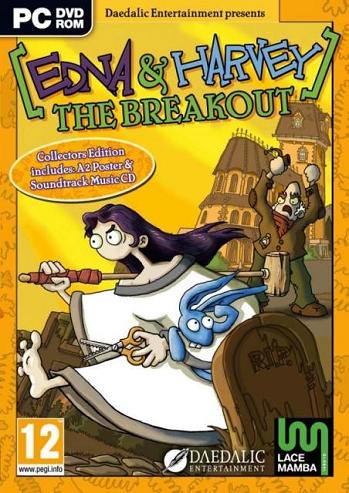 Edna: Is Dr. Marcel still after us?
Harvey: Who cares? Let’s burn something!
— The German cover
Advertisement:

Edna Konrad wakes up in a padded room. She doesn’t remember how she got there — in fact, she doesn’t remember much of anything — but she knows that she is being wrongfully imprisoned. After all, she is completely sane — a fact to which her talking rag doll rabbit, Harvey, can attest. Harvey has another remarkable ability: When he is shown things that remind him of Edna’s childhood, he can "tempomorph" her into the past — or rather, her recollection of the past — where she not only finds out about her life before the stay at the asylum, but also (re-)learns abilities that help her escape from the asylum.

This is the basic premise of Edna & Harvey: The Breakout (Edna bricht aus in the original German release), a 2008 low-budget Adventure Game (though it didn’t come out in the US and UK until 2011) that started life as a dissertation on the topic The Computer Game as a Non-Linear Narrative Form. Despite its 2D graphics and classic verb interface, it turned out to be a huge hit and won many awards.

Had a spin-off titled Edna & Harvey: Harvey’s New Eyes in 2011. It was released in English in 2012. An Anniversary Edition with updated graphics was released in December 4th, 2019.

Tropes featured in this game include (spoilers ahoy!):