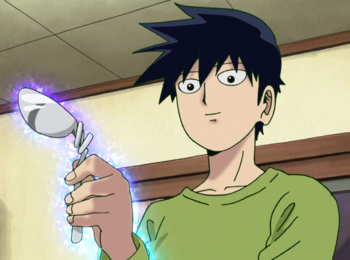 Good luck with that soup.
"Do not try and bend the spoon, that's impossible. Instead, only try to realize the truth ... there is no spoon. Then you will see it is not the spoon that bends, it is only yourself."
— Spoon Boy, The Matrix
Advertisement:

Spoon Bending is arguably the most common way of demonstrating Mind over Matter next to making Your Head A-Splode. And much less messy.

The art of spoon bending is the deformation of objects, especially metal cutlery, either without the use of physical force, or with less force than would normally seem necessary. It is a common form of stage magic, and a variety of methods are used to produce the illusion.

Spoon bending attracted considerable media attention in The '70s when some people claimed to have the ability to cause such events by paranormal psychic means. The most notable was Uri Geller, who performed by bending metal spoons as well as metal keys and several other objects and materials. Geller's performances were attributed to stage magic by critics such as James Randi and Martin Gardner.

While spoon bending in real life is an art based around misdirection, simply convincing the observer that the spoon is moving, pop culture has come to associate bending spoons as a technique among those with psychic powers. Spoons are small enough to grasp, common enough to find and are easy enough to bend with physical force, so it stands to reason that utensils like the common spoon would make a harmless psychokinetic demonstration.