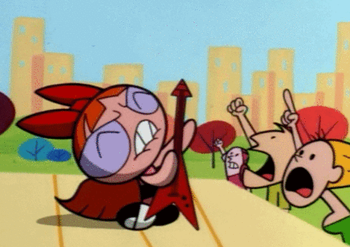 How can Blossom play the guitar without fingers? Or thumbs, for that matter? note At least she's not typing with boxing gloves on.
"So the dog brings out the trash? How can it even hold things with those knubby arms?"
— Mr. Dwicky, Invader Zim, "Vindicated!"
Advertisement:

A character in an animated work has no apparent hands, but yet still manages to pick things up and manipulate things as if they did. Some do have thumbs, some don't have thumbs, and some have thumbs appear when grasping something or gesturing, but disappear otherwise.

Can sometimes be a feature of a Super-Deformed design.

Compare Magnet Hands and Four-Fingered Hands. See Bell-Bottom-Limbed Bots for the mechanical equivalent. If the character is an animal that actually doesn't have hands or fingers, but still manages to manipulate things as if they do, that's Feather Fingers.

Kwazii may not be hurt, but he sure is a smartass.

Example of:
How Many Fingers?

Kwazii may not be hurt, but he sure is a smartass.