Web Animation / The Light of Courage 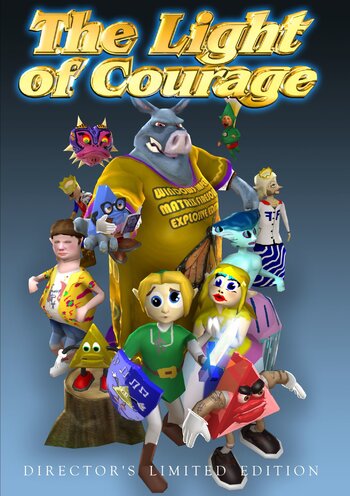 This is a ti-THIS IS A TIME, for which a hero must succeed. Failure, is not a choice...note In clockwise order: Ganon (holding the Triforce of Wisdom), Tingle, Prince Facade, Ruto, Princess Zelda, the Triforce of Power, Link, the Triforce of Courage, Eian, King Hofane and Majora's Mask
Advertisement:

. Joe_Cracker's attempts to pitch his script, which was itself of dubious quality, are a saga unto themselves, but several denizens of the forum got together, made some animations based directly on the script, and posted them on the internet. These shorts lift dialogue directly from the script, complete with syntactical and grammatical errors. The characters were rendered in a blocky, polygonal style with several animation errors kept in for humorous effect. This resulted in shorts that are pretty funny to watch on their own, but absolutely hilarious if one knows the saga behind them.

, read about the author's three-year-long odyssey to get his movie made here

, and finally, the original script that started it all has been mirrored here

The Light of Courage provides examples of:

Princess Zelda shoots a beam with the Triforce of Power to sever Ganon's hand without a drop of blood.

Princess Zelda shoots a beam with the Triforce of Power to sever Ganon's hand without a drop of blood.