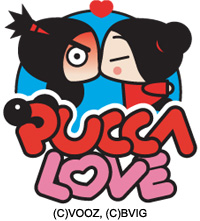 Originally a cute little character created by Korean company Vooz, plenty of merchandise goodies, a Web Animation series, and later a television series, it's about Pucca, who is a young girl living with her uncles, a trio of Chinese chefs. Pucca is in Mad Love with her "boyfriend" Garu, a Ninja who is none too keen on her outlandish displays of affection. The series takes place in the town of Sooga, an Adventure Town with plenty of Eccentric Townsfolk, including off-season Santa, who spends the 364 other days of the year in town relaxing.

Pucca became popular worldwide because it relies on visual and gag humor rather than language, much like The Pink Panther, the Road Runner and other pantomime cartoons. Though the series has since picked up dialog, translation has worked well enough and the series remains mostly silent. Both show leads, Garu and Pucca, are Heroic Mimes, though they do laugh, sigh and make other sounds.

The TV series, a co-production between Vooz, Studio B Vancouver and Jetix Europe N.V. (Majority owned by Disney), aired for two seasons from 2006 to 2008. A third season, which served as a Continuity Reboot, was aired in South Korea in December 2018 on MBC and Tooniverse. It was produced by Vooz and CJ ENM, with Thai animation company RiFF Studio providing the 3D animation, and distributed internationally by Planeta Group without Disney nor Studio B's involvement. The company would also acquire the distribution rights to the first two seasons from Disney.

As of January 2020, Netflix released the third season under the title Pucca: Love Recipe, with an English dub.