Jailed One After Another 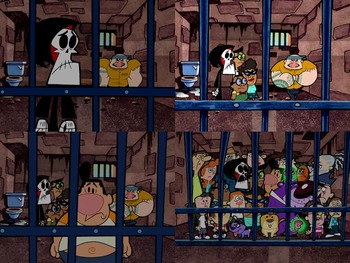 "I'm not even on this stupid show anymore!"
Advertisement:

So Bob has the misfortune of being arrested for something. Maybe the arrest was legitimate, maybe he was framed. Maybe the reason he gets in trouble is frivolous and shouldn't be considered an offense in any way. In any case, he'll end up being charged as guilty and locked behind bars.

Bob won't be alone in this, as Alice soon joins him in jail. More often than not, she too has done something that really wasn't a big deal. But sometimes, she really was committing a crime in helping Bob escape.

If taken to an extreme, several other characters could also get put in the slammer in rapid succession, often in the very same cell. All in all, the authorities are working fast.

As a case of Rule of Funny, there may be a stereotypically thuggish inmate locked in with the cast.